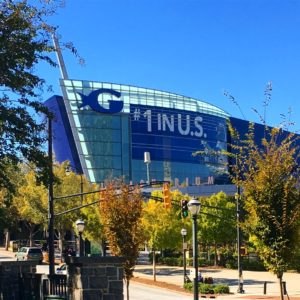 Sponsored post – Georgia Aquarium hosted us.  All opinions are my own.

The Georgia Aquarium is located in downtown Atlanta.  It is the largest aquarium in the Western hemisphere.  It has more than 10 million gallons of fresh and marine water and more aquatic life than found in any other aquarium.  It was my daughter’s 2nd birthday, so we took her on a special visit to see her favorite bird, the penguin!

The aquarium is near several attractions, such as the World of Coca Cola, Centennial Olympic Park, and the Altanta SkyView.  It has its own parking garage, which has an attached walkway that leads to the entrance.  When we arrived on a Thursday morning, we were able to quickly park and head into the queue for admission.  Tickets are taken inside the building, where we were greeted by the first tank of fish.

When you first arrive (or even before arriving) make a plan for the day including when you’ll see each show.  You can view the daily schedule here and on the Georgia Aquarium mobile app.  Insider tip: The mobile app lists all of the animal feedings throughout the day.  There are several show times per day.  For the larger shows such as the AT&T Dolphin Celebration and the California sea lion show, you’ll want to arrive at least 30 minutes early to get a good seat.  They do pre-shows to warm up the crowd, and it’s nice to keep the kids entertained while they wait for the main event.

For the Dolphin Celebration, the theater is a bit of a walk from the main atrium and is quite large.  Allow plenty of time 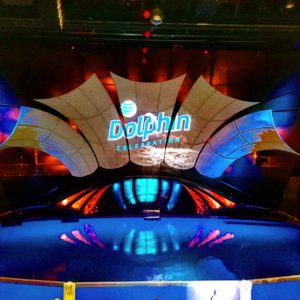 to get there and choose a seat.  The aquarium is very thoughtful about strollers.  There is a specific stroller drop offs for the large shows.  We checked our stroller for the dolphin show and got a seat in the first row of the top level.  There is a splash zone, so keep that in mind!  If your child needs to leave the theater during the show and you’re sitting at the top level, there are elevators for a quick exit.  The Dolphin Celebration is an amazing show.  You’ll definitely want to have that on your itinerary for the day.

Under the Boardwalk, a second main show at the aquarium, features California sea lions showing off their skills.  The crowd gathers outside the theater and watches a cute pre-show that features the host of the show and some other incredible creatures.  The show includes some adorable interactions with the trainers and the sea lions.  It also serves to educate the attendees on the issues with sea lion pups getting stranded on the beaches.  They explain the rescue effort that the aquarium is involved in, and how a few of the sea lions came to live at the aquarium. 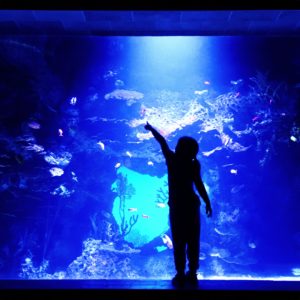 There are several viewing galleries to explore in addition to the dolphin and sea lion shows.  My kids were especially excited about the penguins, so we headed to the Cold Water Quest gallery to see their impressive African penguin exhibit.  This exhibit includes 25 nesting areas and a viewing area that makes you feel as though you’re among the penguins.  We also enjoyed the Beluga whales in this area, as well as some awesome sea dragons.  We went to the next exhibit just in time to see the Waddle Walk, a daily stroll of the penguins through the main atrium.  It was fun to see them walk around, and we even saw one get on the elevator after their walk.  My daughter thought that was hilarious!

Our second favorite gallery was the Tropical Diver, which was absolutely beautiful.  My kids enjoyed trying to “Find Nemo” and of course, Dory.  The jellyfish exhibits were amazing; I could have watched them forever, but Aquanaut Adventure was opening (keep in mind it opens in the afternoon – times may vary).  We were excited to enter this kid-friendly, hands-on area, starting with the touch tank which was low enough for my youngest daughter to get her fingers on some cool sea life.

As our day was coming to a close, we enjoyed a quick lunch in Cafe Aquaria, the cafeteria-style eatery and 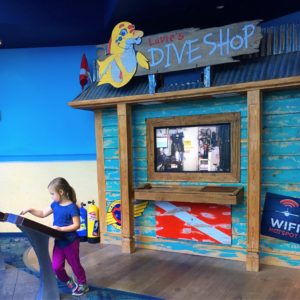 browsed in the gift shop for souvenirs.  Since the aquarium is so close to Centennial Olympic Park, we let the kids play in the park a bit before we left for the day.  With the shows and the wide-varieties of galleries, some of them we went into twice, the aquarium can easily be an all-day adventure.

Sponsored post – Georgia Aquarium hosted us.  All opinions are my own.

Sponsored Post – VisitErie hosted us at Erie Zoo. All opinions are my own. Erie Zoo is a zoological park located at 423 West 38th...