Sponsored post – Busch Gardens Williamsburg hosted us.  All opinions are my own. 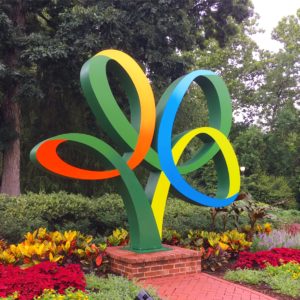 usch Gardens Williamsburg in Virginia is an amusement park themed around various European countries.  The park is known for its lush and beautiful landscaping, world-class thrill rides, and delicious food.  We visited on a Friday during June, and while the weather was rainy, we were still able to enjoy all of what Busch Gardens has to offer.

Upon entering the park, we immediately entered the country of England and ahead was the first thrill ride, Loch Ness Monster.  This coaster is celebrating its 40th anniversary this year, so be sure to ride it!  Its uniqueness comes from its interlocking loops.  It’s a fun coaster, though not the most thrilling one in the park. 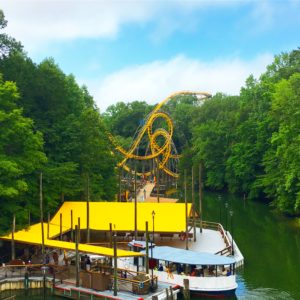 Invadr is a new family coaster in the park, and has excellent themeing in the France area.  It’s the park’s only wooden coaster, and it moves pretty fast even though it doesn’t seem like it would be the most thrilling coaster.  My six-year-old loved it!

Alpengeist, Griffon, and Apollo’s Chariot are the coasters aimed at the thrill seekers.  Griffon pauses for a moment before its 205 foot tall, 90 degree drop.  It then hits its max speed of 71 miles per hour.  So cool!  My other favorite part of Griffon is the splash down, however you don’t get wet one bit.  Alpengeist is a steel inverted coaster and boasts being the world’s tallest inverted coaster.  Finally, Apollo’s Chariot is a smooth, fast ride.  Unfortunately, Verbolten, the park’s newer steel launch coaster was closed on and off during the day, and we didn’t get to ride it.

We visit dozens of amusement parks each year, and we’re not used to looking forward to eating the food.  At Busch Gardens, we couldn’t wait to head into the German section of the park and try the German food in Das Festhaus.  We were also pleasantly surprised by the way they handled the entrance into the food court area.  They only let a certain amount of people in at a time, and they directed us to a particular food line.  It felt very orderly, in an area that could easily be overwhelmed by people if it were a crowded day.  We were also able to enjoy our food in the air conditioned building which was nicely themed.  They have shows on the stage in the middle, but unfortunately we didn’t time it right.

Countries feature signature foods, and while we didn’t get to try every type of food available we were greeted by wonderful smells every time we entered a new area.  My favorite smells were upon entering Italy and walking by Marco Polo’s Marketplace.

Busch Gardens has some kiddie rides spread throughout the park.  As the adults and older children enjoyed the 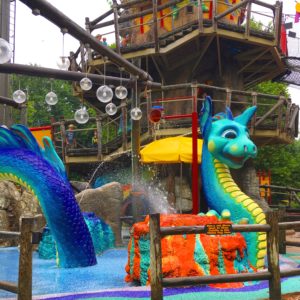 roller coasters, we were often able to find a ride nearby that the younger children in our group could ride.  There are two concentrated kiddie areas of the park, the colorful Land of Dragons and Sesame Street Forest of Fun.  Land of Dragons includes a tree house structure for the kids to climb, as well as four rides (boats, dragons, ladybugs, and a small ferris wheel)  Tip: If it’s a hot day, and your children enjoy splash parks, bring a change of clothes for visiting Land of Dragons.  There’s a cute water spray area there.

Sesame Street Forest of Fun is an easy walk from the front gates of the park with several rides and play areas for the kids, as well as Sesame Street characters!  The area opens at 11 AM, and includes dance parties, arts and crafts, games, and more.  The kids can enjoy Grover’s Alpine Express, the kiddie coaster for the park, as well as a small drop tower, water ride, and a spinning ride.

While the park is huge, luckily they have two main modes of transportation to get around the park.  The first is the train, which mostly goes around the parameter of the park with stops in several villages.  The other option is the skyride, which has one way trips between England, Germany, and France.  Since the park is so large, making it fun to get from one place to another is such a great idea. 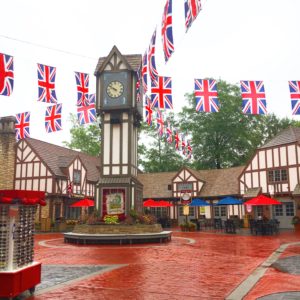 Sponsored post – Busch Gardens Williamsburg hosted us.  All opinions are my own.

Disclaimer:  Caution must be used at all times as natural hazards exist in the wilderness.  Please play wisely and follow the applicable...

Haar's Drive-in Entrance Haar's Drive-In is located in Dillsburg, Pennsylvania close to Route 15. The drive-in has been in business...

Disclaimer:  Caution must be used at all times as natural hazards exist in the wilderness.  Please play wisely and follow the...

Paulus Farm Market is located on York Street in Mechanicsburg. It's important not to get this market confused with Paulus Mt. Airy...

Disclaimer:  Caution must be used at all times as natural hazards exist at Kilgore Falls.  Please play wisely and follow the...