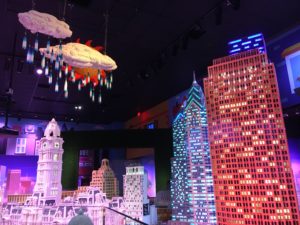 Sponsored Post – Legoland hosted us for a preview event.

Legoland Discovery Center is located in the Plymouth Meeting Mall, right off of the turnpike near Philadelphia.  The Discovery Center had its grand opening at the beginning of April, and we were excited to attend a preview event.  When arriving at the mall, the Discovery Center entrance is toward the back of the mall, near the theaters.  A large giraffe made of Legos greets you at the doors, so you know you are in the right place.  After paying admission, there is a photo opportunity in front of different Lego scenes, and then you can board the ride.

The ride into Legoland Discovery Center is a slow-moving ride on a track that takes you through different Lego inspired interactive scenarios where you can use your magic wand to perform certain tricks.  You can rack up points, and see who wins at the end when you arrive in Legoland.  Inside the Discovery Center, there are several areas to play.  The areas include: Lego Friends, 4D Cinema, Ninjago Training Camp (Laser Maze), Build Challenge Circle, Miniland, Build & Test, Duplo Park, Earthquake Tables, Pirate Adventure Island (a multi-story play area), and a small children’s play area with slide. 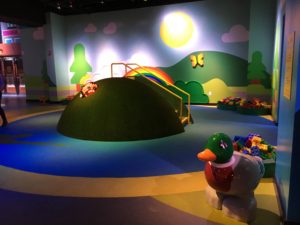 We started with the 4D Cinema, which blows air and sprays a bit of water during the 3D movie.  My five-year-old daughter enjoyed the movie, and the Lego theme of the movie rotates between showings.  Next, we headed to the Lego Friends area, which is my daughter’s favorite.  We played at the Lego tables in the Friends area for a while, before stretching our legs in the Pirate Adventure area.

After the play area, we walked through Miniland and tried all of the buttons to make the Legos move and play music.  Miniland cycles through day and night, and if you wait until night there is a special surprise over the boat house row exhibit.  Be sure to notice all of the details in Miniland; it’s quite impressive.  We also tried the build and test area, though we didn’t have much luck with building a car.  We ended up racing a car that we found already built, and there is a special slide to do this.  The slide allows kids to go down with a race track built beside the slide, so the kids can race their own cars. 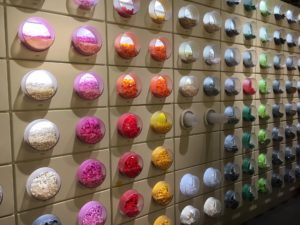 We spent about two hours in Legoland Discovery Center, and then visited the attached Lego store on the way out.  There was an area where you could fill a bucket with a wide variety of Legos, and I let my daughter do that before we left.  She had a good time choosing the brick colors and accessories she would need to build a custom house.  Before leaving the mall, check out the other kid-friendly activities including the two-story carousel, kids soft play area, and ride on animals.

Sponsored Post – Legoland hosted us for a preview event.

Sponsored Post - Trolls LIVE is hosting Been There Done That with Kids in exchange for this ticket giveaway. Trolls LIVE! is coming to...