Sponsored post – Sahara Sam’s Oasis hosted us.  All opinions are my own.

Sahara Sam’s Oasis is an indoor water park in New Jersey.  The indoor water park is open year-round with weekend, some evening, and holiday hours in the winter months.  During the summer months, there is an outdoor portion of the park opens with more weekday hours for the entire park.  While the water park does not have an onsite hotel, there are several hotel partners who offer discounts through a “Stay & Play” package.

Our visit to Sahara Sam’s Oasis was on a Sunday in April, at the end of most of New Jersey schools’ spring break week.  We arrived about ten minutes before opening and were one of the first families to talk in the doors.  We quickly got our wristbands and headed into the park.  To save time at the beginning of the day, everyone in my family had their swimsuits under their clothes.  That way, we didn’t have to spend time in the locker rooms.  We picked some chairs by the kid’s area and headed right for the big slides.  If you need a locker for your belongings, they do have wristbands available for sale for access to the lockers. 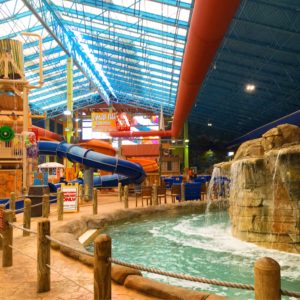 There are several areas in Sahara Sam’s.  The toddler area consists of two small slides and a few spray elements.  Next, the large play structure in the middle of the park is called Tim-Buk-Tu.  It has two medium-sized slides, lots of water-play elements, and the large tipping bucket of water.  Beside Tim-Buk-Tu is the lazy river, which winds around the one side of the park.  For an indoor park, the lazy river is longer than I thought it would be!  At the back of the park, there are stairs that lead to the two tube slides, a body slide, and a family slide with a large raft.

On the opposite side of the park from the lazy river, there is an cargo obstacle course and basketball hoops.  Beyond that is a new section of the indoor water park which includes a swimming pool and a two mat slides.  There are also additional chairs and lockers in this side area.  My kids liked to relax and play in the pool between the slides.

For food choices, there is a small snack stand in the front of the park, but we choose to visit the food court to get a snack.  Since we arrived early and rode a bunch of slides at the beginning of the day, we seemed to be hungry before anyone else at the park.  We had the food court mostly to ourselves.  The food consists of the usual park entrees such as pizza, soft pretzels, ice cream, etc.  From the food court, we also got a peek at the outdoor attractions that were not open on that chilly day in April.  A wave pool, large swimming pool, and splash pad make-up the outdoor attractions.

Sponsored post – Sahara Sam’s Oasis hosted us.  All opinions are my own.

While there's only a couple indoor water parks within the state of New Jersey, there are quite a few within a few hours drive that are fun...