Sponsored post – Cherry Crest Adventure Farm hosted us.  All opinions are my own. 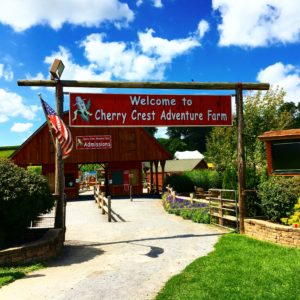 Cherry Crest Adventure Farm is located close to Lancaster, Pennsylvania and also not far from the Strasburg Rail Road.  I looked at the map of the farm before we arrived, but I was still surprised how big the farm is when we arrived early on a Saturday morning.  I quickly realized how much there is to do, as we debated where to start.  After getting our tickets, we headed straight to visit the Farm Animal Center where my daughter was excited to feed the goats and hold the baby chicks.  It was a great first stop at the farm, to see the kids interacting with the animals and learning about how to raise animals on a farm.  We spent a lot of time there, but the kids could see even more fun activities close by, so we headed to the next area.

The brightly colored jump pillows caught my daughter’s eye, and she hurried over to them and started jumping.  The farm has two different jump pillows to separate the children by size, so that the littlest ones aren’t jumping with older children.  There’s also a Lil’ Farmers Playland where the youngest of the family can enjoy activities more catered to them.  My youngest daughter’s favorite parts were the water play area and the unique face-to-face swings that an adult could ride with the child.  While my youngest daughter played here, my five-year-old ventured to the slides, which were rather slow at first.  We quickly learned that it’s best to wait until later in the day to ride the slides, as they were slow in the morning, but as it warmed up they became so fast that I needed to use the soft landing pads at the end of the slide! 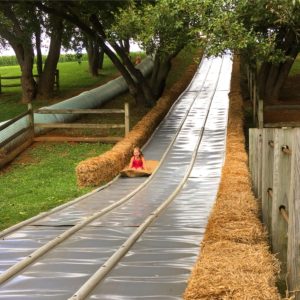 After experiencing all of the activities in the middle section of the farm, we headed to the newer part that is a bit further away.  This took us to the Country Road Carts, which was one of my five-year-old’s favorite attractions at the farm.  These are pedal carts are powered by the adults in the back, while the kids sit up front and enjoy the view.  My kids especially enjoyed the first turn, which was quite fast as we picked up speed down a small hill.  We rode the carts several times, and then moved on to the fun new shooting ranges that also occupy the far end of the farm.

With all of the fun things to do at the farm, it’s easy to forget that train tracks run close by, and every now and then a Strasburg Rail Road train appears with loads of people waving to us.  The kids will stop in their tracks to gaze at the train and wave at the other kids riding the train.  It’s a cool extra feature of the farm that you can even board the train nearby and ride it to Strasburg and back. 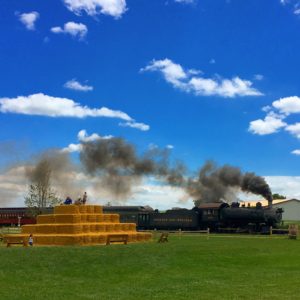 We also tried out the new Round Bale Racers, which were a lot of fun, but required coordination!  They are a bit more of a challenge than how easy they look, but so fun to race with the kids.  After all these fun activities that used up our energy, we were in need of a snack, thankfully there is plenty of farm-fresh food and treats.  I wasn’t expecting to stay at the farm all day, but there was so much to do, the kids didn’t want to leave.

A visit to Cherry Crest Adventure Farm can be paired with trips to kid-friendly destinations nearby, such as Tiny Town, Hands on House, or Dutch Wonderland.

Sponsored post – Cherry Crest Adventure Farm hosted us.  All opinions are my own.

Hersheypark 2021 – What to Know for This Season

Been There Done That with Kids was chosen as a Sweetest Family for Hersheypark 2021. Our trips to Hersheypark are sponsored by Hershey...

Farms Near Pennsylvania for Kids

Farms to Visit with Kids Once the weather starts to get nice, it's time to check out kid-friendly farms near Pennsylvania. Be sure to...

Adventure Park is a 53-acre park located close to I-81 in Mechanicsburg, PA. Mechanicsburg is a town located on the outskirts of...

The mid-Atlantic region includes many fun things to do near me (nearby). Whether it's a quick day trip to a neighboring state, a...

There are tons of amazing parks near Pennsylvania that are fun to visit as the weather becomes warmer. This post covers some real gems of...